Wow, that was easy

A masked figure broke a window, slipped into the Paris Museum of Modern Art, and absconded with $100 million in art.
He broke a window and walked in. From an area that local skateboarders knew wasn't really ever watched. And then walked out with five paintings.
Are you kidding me?
Isn't that a bit...well...mundane?
I want my art thefts to be like something out of the remake of The Thomas Crown Affair. Suave, daring, smooth, dashing.
Breaking a window and climbing in? Sure, if you want to steal my blender but not when you're stealing $100 million in art.
How disappointing.
I bet the thief didn't even have a really cool soundtrack.
Posted by Chris at 10:04 PM 0 comments

I'll admit it. My political geek is emerging again after a hiatus following the 2008 Presidential Elections though my interest in tomorrow's various primaries is akin to watching a car crash in slow motion or a natural disaster uproot trees and barns.
Anyone know the Vegas odds on Republican-become-Democrat Arlen Specter's chances of surviving his primary?
Posted by Chris at 11:32 PM 0 comments

Photo of the Day 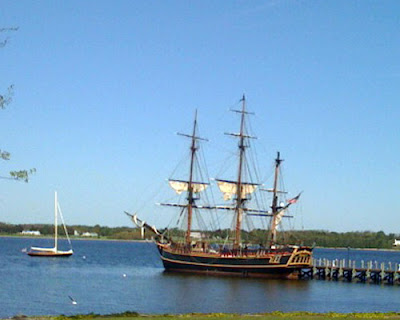 The HMS Bounty enjoyed a 1-night layover in Bristol, tied up at the docks opposite the Herreshoff Museum. As someone lucky enough to have crewed on two tall ships, I can't pass by a ship like this without stopping to watch, just for a little while.
Posted by Chris at 11:33 PM 0 comments

Links to this post
Email ThisBlogThis!Share to TwitterShare to FacebookShare to Pinterest
Labels: Bristol, HMS Bounty, photo of the day, tall ships

Defend it by ignoring it?

I thought congressmen and senators took an oath to uphold the Constitution and the constitutional rights of U.S. citizens? Then why are GOP senators advocating that the Times Square car bomb suspect be denied those right and subjected to enhanced interrogation (you know...what non-politicos commonly refer to as torture)?

Yes, Faisal Shahzad apparently confessed. Yes, if he's guilty, he should be put away for a long, long time. But it's a scary step to consider NY Rep. Peter King's statement about denying Shahzad his rights by stating "I know he’s an American citizen, but still..."

The Constitution is a brilliant document designed to help guide our country and establish the rights of and protections for its citizens. But is it actually possible to defend and uphold the Constitution by ignoring it or tossing it aside for the purposes of expediency or political posturing as "tough on terrrorism"?

I have my doubts.

I highly recommend Emily Bazelon's analysis of the Miranda issue and how law enforcement worked within the law to gather a wide range of valuable information legally. She also excoriates Senator Joe Lieberman for pushing a new bill that would permit the government to strip you of your U.S. citizenship if you are even accused of being involved in a foreign terror plot, not even convicted. No word on what Lieberman would do to people involved in domestic terror plots...
Posted by Chris at 10:03 PM 0 comments

As the growing environmental disaster spreads along the oil-slicked waters of the Gulf of Mexico, I wonder how many people are chanting in support of offshore drilling at Sarah Palin gatherings? Hmmmm...is it just me or does she seem strangely silent as well.

(On a serious note, I'm sending positive thoughts down to the Gulf and the thousands of people trying to contain the damage from this increasingly devastating spill. It's no laughing matter.)
Posted by Chris at 9:45 AM 0 comments