If I was a shareholder, I'd be pissed

Reuters is reporting that stockholder in companies endorsed by Tiger Woods lost up to $12 billion as a result of his scandal. Ouch! I wonder if those losses can be deducted from your taxes. "Please Mr. IRS person, I should be able to count those losses because our highly paid spokesman couldn't keep his 3 iron in his pants."
Posted by Chris at 3:57 PM 0 comments

I'm not sure what's more ridiculous about this story -- the fact that the mother called 911 because her son wouldn't stop playing video games or the fact that the police actually sent two officers to deal with the issue.
Posted by Chris at 11:15 PM 0 comments

Where have the ideas gone?

Jonathan Chait's article, "The Rise of Republican Nihilism" published today in The New Republic is well worth reading. In it, Chait examines the following idea:

It's a fascinating piece, as is the companion piece, "Women’s Suffrage and Other Visions of Right-Wing Apocalypse", which takes a look at classic Republican quotes in opposition to social reform like women's suffrage, Medicare, and a national minimum wage. While they're all good, my personal favorites from this list include:

“[T]he child will become a very dominant factor in the household and might refuse perhaps to do chores before six a.m. or after seven p.m. or to perform any labor.”
—Senator Weldon Heyburn (R-ID), in 1908, on why child labor should remain unregulated


“It is destroying the amicable relations between the white and Negro races that have been created through 90 years of patient effort by the good people of both races. It has planted hatred and suspicion where there has been heretofore friendship and understanding.”
—Senator Strom Thurmond (D-SC), Senator Richard Russell (D-GA), and other Southern legislators, in 1956, describing the perils of integrating public schools

Links to this post
Email ThisBlogThis!Share to TwitterShare to FacebookShare to Pinterest
Labels: Jonathan Chait, republicans, The New Republic, The Rise of Republican Nihilism

I've been in Manhattan since Sunday, ensconced in a seminar during the days and doing some exploring at night. The offices hosting the seminar are right on Times Square, well 48th and Broadway to be precise, but basically, it's ground zero for Christmas craziness and huge crowds. I head home tomorrow evening following the fifth and final day of seminars. As I prepare to pack up and head home, I figured I should post some observations.

---------------
I managed to get a hotel room only a few blocks up Broadway so it's been an easy walk to and from the seminar each day. The hotel seems to cater primarily to European tourists and Air France flight crews. I feel like I'm in a foreign country as I walk through the lobby or stand in the elevators. Everyone is talking French or Spanish. If they're speaking English, it means they're British, Scottish, or Irish.

It's a comfortable, not many frills hotel, which is just fine. The bed is clean, the pillows are decent, and it's quiet. Of course, it's always disconcerting to step out of the hotel in the AM, turn to the right to walk to Broadway, and be faced with a giant billboard declaring "New York has a Bedbug Problem! Protect Yourself!" Nice advertising, that. No sign of any nasty little critters so far.

---------------
The next block up is home to the Ed Sullivan Theater where David Letterman's show is filmed. Sadly, no luck getting tickets. I suppose I could have tried to be featured on the show by going into Flash Dancers, the strip club and sushi/sake bar across the street that is sometimes featured in the "live camera segment" of the show but I don't like sushi.

---------------
If you're looking for an excellent meal of Mexican cuisine, I heartily recommend Rosa Mexicano on Columbus and 62nd. It's the third one that's opened in New York apparently and I met my uncle there for dinner. It was phenomenal. 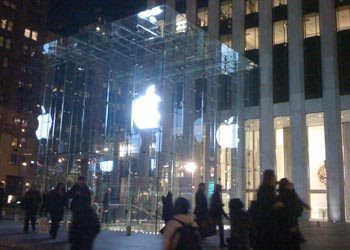 The view from the outside -- the Apple Store Cube
It just screamed out for me to buy something. Much to my wife's surprise, I showed great restraint and bought nothing. I have a perfectly fine iMac at home, an excellent laptop for work purposes, and all the other gadgets I might need. Still, those new Bose Quietcomfort 15 noise canceling headphones...mmmmmm. Nope, I refrained. I have a nice set of Audio-Technica noise canceling headphones for travel. But still, the place is open 24 hours a day, there's tons of stuff to try and to buy, and I don't think it ever isn't busy. I was there at 10 PM (yes, I'm here in NYC alone and have no life) and it was packed. 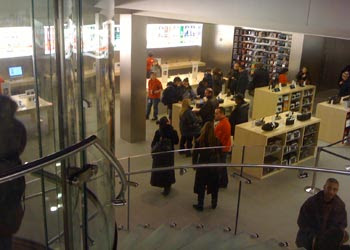 Heading down the curving stairs next to the clear cylindrical elevator into geek heaven
---------------
While I don't think I could live in New York City, I do enjoy visiting. One thing I find appealing (being something of a night owl) is that people have no problem going out for dinner at a decent restaurant at 10:30 PM.

---------------
I owe my brother-in-law an apology. While I've always had very good service with my iPhone, he's told me on many occasions of the lousy iPhone service in New York City. I never believed him until this trip, my first to the Big Apple with the wonder phone in my pocket. I'm a believer now. It's sad when I have to step outside to make a phone call because I'm unable to connect inside some buildings.

---------------
It's a damn shame when a restaurant ruins a truly excellent hamburger -- organic Angus beef, perfectly cooked, really tasty -- by putting it on a lousy roll that isn't much more than the puffed-up white bread used by McDonald's or BK. Don't they realize that an outstanding crusty roll or other good bread is just as important to the whole hamburger experience?

---------------
Did you know that it takes 15 people and 6 months to make a traditional Japanese sword? I learned this at the "Art of the Samurai" exhibit at the Metropolitan Museum of Art.

Yes, New York is safer than it once was but sometimes you get reminded that in a city of 7 million people, unpleasant things happen. Yesterday, as I was walking to lunch during the seminar break, I was accosted by a young man holding CDs in plain cases. I did my best to ignore his entreaties to tell me my name, where I was from, or to consider taking one of the CDs. On my way back from lunch, a different guy hit me with the same pitch and I ignored him, too. Today, one of those guys is dead following a shootout with cops two blocks from my seminar location about an hour before today's seminar ended, right on 46th and Broadway in Times Square, a place I've walked a number of times this week and in past visits.

---------------
I think the single greatest benefit of being in New York City is access to the museums. They're all over the place and they're amazing. There's nothing quite like walking through the Museum of Modern Art, turning the corner, and coming face to face with a masterpiece and then another one and another one. 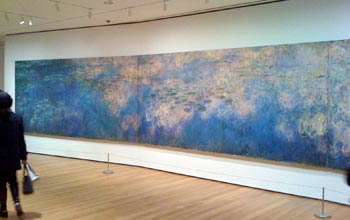 A roomful of Monet's water lilies 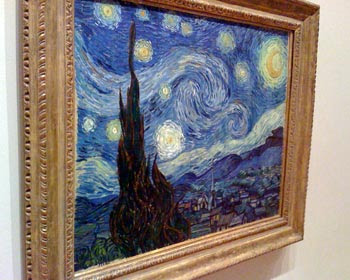 Up close and personal with Van Gogh's Starry Night 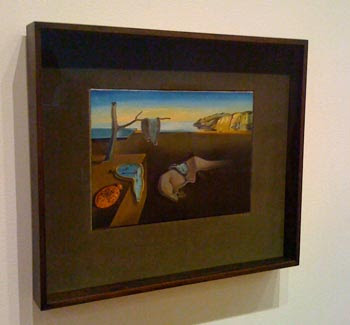 The unique perspective of Salvador Dalí 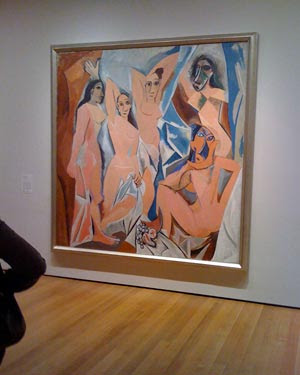 It's refreshing to know that in the eternal competition between high-class escorts and mistresses of married celebrities, that there are still some standards you can count on.
Posted by Chris at 11:48 AM 0 comments

There's snow on the ground. I don't know how long it will last but it's the first of the season here and it feels soothing to stand by the window and watch it come down in the darkness.

Trekkies under the tree

For those of you with Star Trek geeks in your family, allow me to point the way to some Christmas gifts for your consideration...

Star Trek cologne, including Tiberius for that overacting male with a bad toupee in your life and Pon Farr for that lovely lady who wants to add some zip more often than once every seven years

A Live Long and Prosper foam hand, for when you have some fine motor control issues at the ball game

And finally...Red Shirt Star Trek Cologne and your very own Red Shirt clearly defining your role in the Star Trek universe because the future is coming but you're not going to live to see it.
Posted by Chris at 7:15 PM 2 comments

Return of the Judo Master

Vladimir Putin is leaning toward running for the presidency of Russia again but says he'll sit down with current president, Dmitri Medvedev, to decide which of them will run in 2012.

Any bets on who will step aside?

And is anyone really surprised by this news?
Posted by Chris at 9:08 PM 0 comments

Another reason to go back to Maine

We love Maine. It's our favorite vacation spot and, when we win the $200 million Powerball jackpot, we'll be sure to spend loads of time in our secluded cabin on the rocky shores of Mt. Desert Island with regular jaunts down to Portland for Sea Dogs baseball games. As if we didn't already need more reasons to spend time there, a new attraction is opening in Portland and it will be on my must-see list the next time we're back there:

Seriously...where else can you go to see lifesized Bigfoot, coelacanth, and Fiji mermaid scultpures?

Plus, you can get some cool Christmas tree ornaments (be sure to read museum curator Loren Coleman's comments about the differences between the two).
Posted by Chris at 6:58 PM 0 comments

Courtesy of boingboing.net, the world's first rotating kitchen sculpture. Bear with it. It starts slow but is worth watching for at least a little while just to bet on what's going to spill, topple, or crash next:

Joe Conason offers an interesting look in Salon.com at Mike Huckabee's "faith-based" parole and pardon process while Governor of Arkansas and at the grim results, including the tragic slaying of four police officers in Washington State only days ago.
Posted by Chris at 7:32 PM 0 comments