In retrospect, I can’t recall when it started to snow. I suppose I could look it up but it doesn’t matter all that much. It may have been snowing as I trudged to my bus stop on the corner of Irving and Blackstone Boulevard for school that morning or it might have started once I got into class. No doubt, like every other third-grader before and after, I was thrilled at the sight of the snow and the possibility that school would be let out early.

In February 1978, I was attending E.W. Flynn Elementary School, not far from Rhode Island Hospital. It was only my second year in the Providence schools, my family having moved from a small farm town in Connecticut a year and half before. I was among the first kids from the East Side to be selected to ride a bus across the city to attend the recently formed “Gifted Program.” The day of the blizzard must have started out like any other school day. I have no recollection of my parents saying anything special to me about the weather or hearing notes of panic on the television. Third-graders usually have more important things to be concerned with than weather reports.

As the snow began to fall more heavily, word finally made its way around the school that we were going to be leaving early, that the buses had been notified, and that we’d be home in plenty of time to enjoy the weather. We trooped out of our classrooms, lining up along the wall by bus number as we always did, and then began to wait. One after another, the school buses arrived. We couldn’t see them from where we sat but we knew they were there as group after group got up and disappeared down the halls and out into the snow. Our number was never called.

We continued to wait.

There’s something not quite fair about being let out from school early only to have your bus arrive at the regular time instead, hours after everyone else was home making snowmen and drinking cocoa. Apparently, our bus driver had never received the message and, as a result, assumed that school would be letting out at the usual time. So, hours after the rest of the buses had left and the school halls were empty but for a group of 30 annoyed elementary school students, we finally were told it was time to leave. We gathered our bags, boarded the bus, and left E.W. Flynn behind.

Our route home looped around behind the hospital, eventually intersecting Point Street on the west side of Route 195, down the street from the YMCA and only a few blocks from Classical High School, which I was to attend many years later. One student lived on that side of the highway. It seemed to take us forever to get there. I remember her getting off and making her way across the sidewalk and into the house. When she was safely inside, our bus monitor climbed back aboard and we slowly crossed over the highway.

We didn’t get far. The roads had become impassable and our driver, no doubt in consultation with our monitor, came to the conclusion that we could go no farther. We had come to rest along the side of the road, the old Coro building all but lost in the snow across the street. While we waited on the bus, our monitor (I do wish I could remember her name) got off and made her way into an autobody shop close to the bus. After a few minutes, she came back aboard and explained that to keep warm and safe, we would all be going inside. We gathered up our books and bags and followed her into the warmth of the shop. The shop had been in the process of repairing someone’s camper and, with the mechanics’ blessings, we all trooped inside to get out of the cold and have someplace to sit down.

What I found out later was that none of our parents had any idea where we were as we made our way from school to the garage. They knew school had been let out early but thirty children had gone missing. Phone trees were set up, each parent calling several others, all trying to figure out into which snowbank their children had vanished. One of the fathers, unable to wait any longer, strapped on his cross-country skis and, in the teeth of the blizzard, began to ski our bus route from his home on the East Side. Eventually, he found our bus, buried in the snow, and discovered us, eating hamburgers. One of the mechanics had hiked to a restaurant down the street, explained that there were thirty famished children camped out in the garage, and then trudged back with armfuls of burgers and soda.

By the time it was my turn to call home and let my parents know that I was all right, my schoolmates and I were looking on this as a great adventure. Somehow I doubt my mother and father saw it in quite the same light.

Obviously, there was no way to get out that night so when it came time for bed, we climbed into the camper and the other vehicles and settled down for the night. Needless to say, we were all having too much fun to fall asleep immediately. Eventually, several of us got together in the sleeping area above the camper cab and had a spelling bee to pass the time. I suppose it says something about my personality that, trapped in the middle of a blizzard, I would choose to lead a spelling bee as a means of entertainment. The nice thing about it was that I won. Of course, the final result was rather biased. After all, I was the one choosing the words, including those for me, and I knew that I could spell “encyclopedia” and the second graders couldn’t.

Morning finally arrive and with it, our parents. They came on snowshoes, sleds, and snowmobiles, like a frosty tribe of nomads. My father’s transportation of choice was his cross-country skis. He came sliding up, dragging a toboggan and winter clothes for me behind him.  I changed into my snow clothes, said good-bye to our mechanics, our driver, our monitor, and my friends, and then set out across the city with my dad. I’m not quite sure how my dad managed it, skiing along, dragging his son on a toboggan behind him up Wickenden Street. By the time we had reached Fox Point, we were both cold and tired. However, in a show of extraordinary good sense, my father had made a stop on his way to retrieve me, dropping off dry clothes for both of us at the home of a friend. Together, dad and I climbed the stairs to the waiting cocoa, sandwiches, and dry socks.

The rest of the trip home was uneventful as we slid downhill to our home on Wayland Avenue. I spent the remaining days off building forts and not straying too far from my mother’s sight.

While I don’t live in Providence anymore, I do get to the city on a regular basis. I occasionally drive by the autobody shop. It’s still there, across the street from what is now Harvard Pilgrim Health Care. Every now and then, I’m tempted to go inside, to see if they have any photos of a troop of children camped out among the tires and tools, if anyone remembers hiking down the street in a blizzard to keep us from going hungry, or if the owners of the camper were ever told that it had kept 30 kids warm and safe when they were stranded far from home.

(Originally written upon the 20-year anniversary of the Blizzard and submitted to the Providence Journal for its coverage. A text-only copy of the resulting article is posted below) 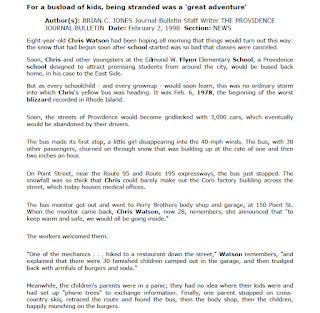 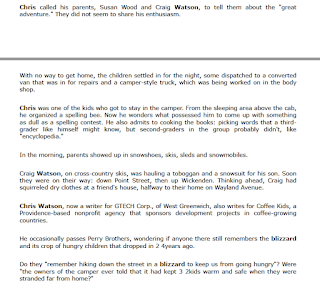 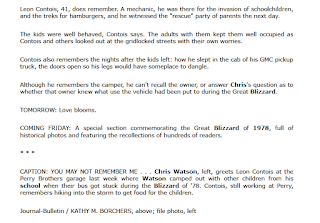